2020/07/09
The special roof structure of the House of Hungarian Music has been completed. Its unique and organic form will make it into an iconic sign expected to boost Budapest’s tourism appeal, said László Baán, ministerial commissioner for the Liget Budapest Project. The playfully undulating roof structure varying in thickness remains under the level of the City Park’s foliage thus the building will blend into its natural environment. In the meantime, Budapest’s local government is trying to stop the Liget Project through legal means, by amending the Városliget Construction Regulation; however, at the partnership negotiations organised on this topic by the Budapest local government the overwhelming majority of opinion-leaders made a stand against the Budapest local government’s proposal and supported the implementation of the complete Liget Project.
László Baán underlined the following in connection with the House of Hungarian Music: ″The completion of the upper level means that the House of Hungarian Music is now structurally complete. The construction work is going on according to plan: the several-floor-high, horizontally uninterrupted glass wall reaching 12 metres at places and made up of solid facade glass panes is under construction and will be the most extensive in Europe. The new institution, built as part of the Liget Budapest Project, aimed at the comprehensive renewal of the City Park, will function as a venue for exhibitions and performances, as well as a music education centre; in other words, as a complex musical initiation facility. The construction of the House of Hungarian Music in itself is a symbol of the objectives of the Liget Budapest Project: thanks to the overall rejuvenation of the City Park, the green areas of the park will be increased and rehabilitated, while its cultural institutions will be revamped to cater to 21st-century requirements.”

The new leadership of the Budapest local government is of a different opinion and initiated the amendment of the Városliget Construction Regulation. This move clearly serves a political agenda aimed at creating legal obstacles to realising the implementation of the world-class cultural developments that have not yet been started, i.e. to thwart the construction of the New National Gallery, the House of Hungarian Innovation and the Városliget Theatre designed for children and youth performances. László Baán called attention to the broad-based social solidarity to support the Liget Project and to protest against the planned amendment of the Városliget Construction Regulation, and numerous civic and professional organisation also voiced their disapproval of amending the Regulation. The National Association of Large Families, the Association of Hungarian Language Theatres, the Hungarian Writers’ Association and the Batthyány Circle of Professors sent an appeal to the Budapest local government to withdraw its proposal; moreover, the Hungarian Academy of Sciences and the John von Neumann Computer Society wrote letters to the same effect to Budapest’s lord-mayor, Gergely Karácsony, while the Civil Solidarity Forum announced a ″virtual peace march”. The nationwide petition advocating the implementation of the complete Liget Budapest Project has almost reached 60 thousand signatories. NiT Hungary, a non-profit organisation with 30 years of experience protecting the interests of close to 4,000 Hungarian road carriers, including some 1,000 special Hungarian private bus passenger carriers, also turned to the lord-mayor asking him to revise the amendment proposal. 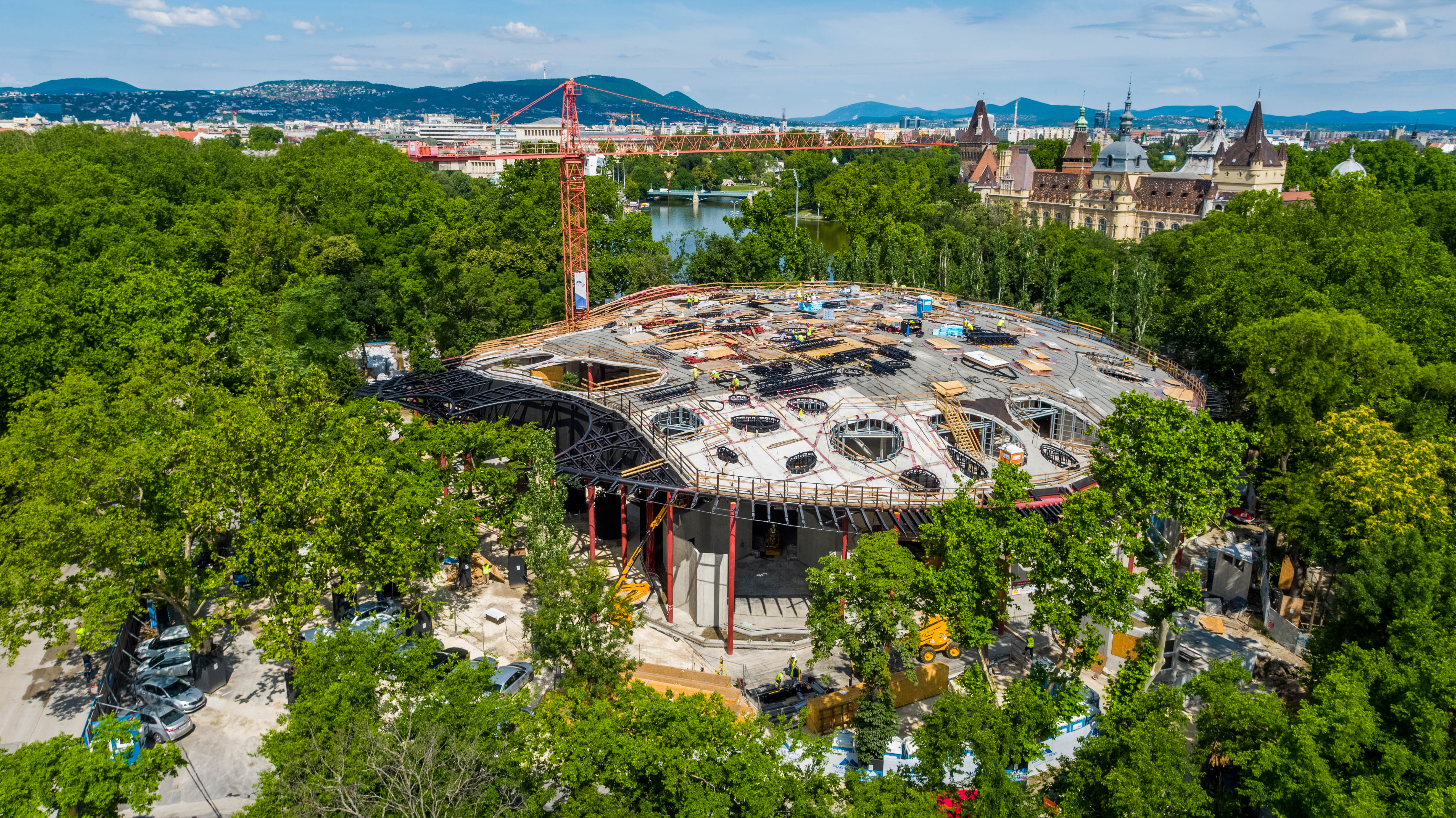 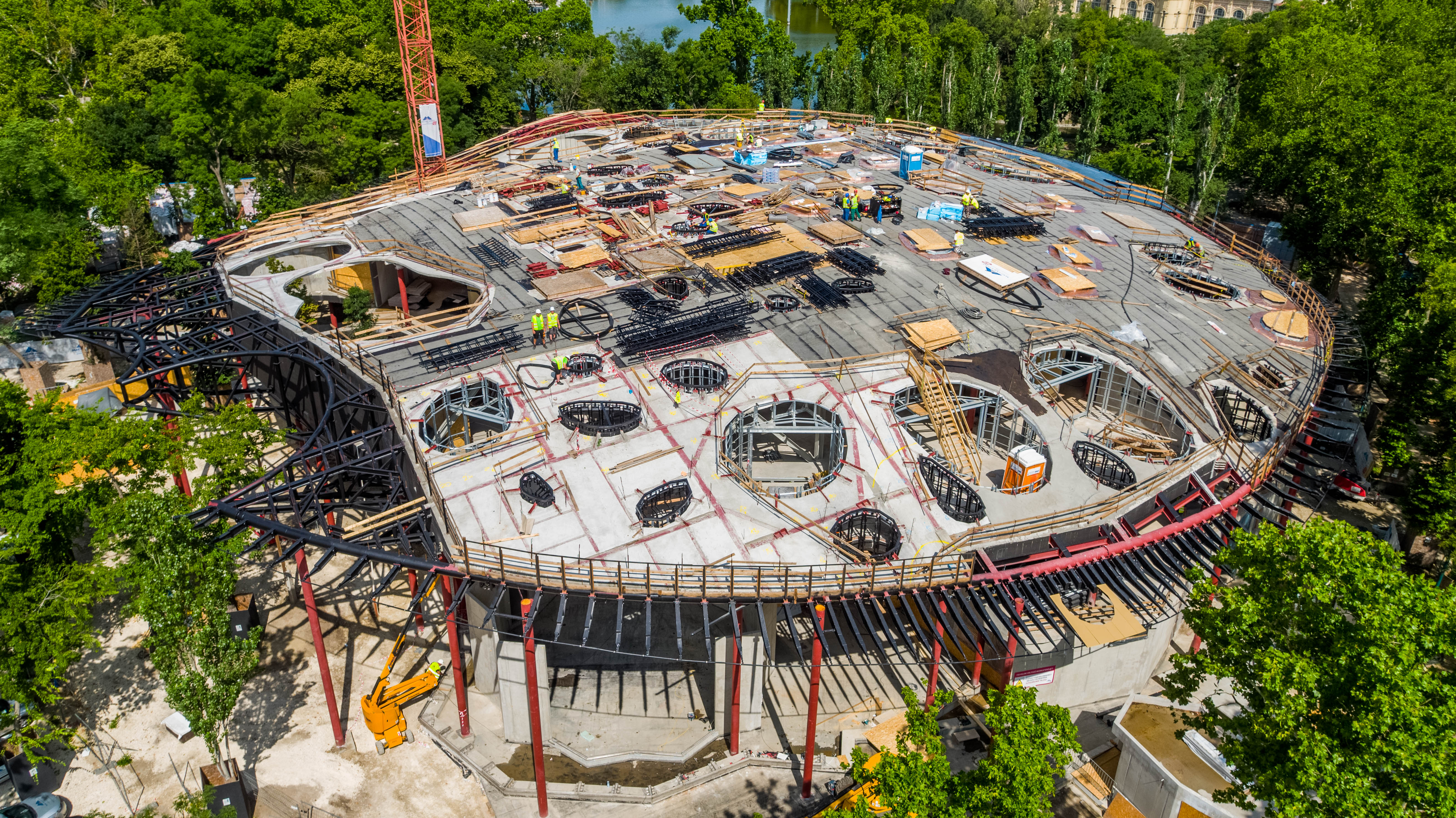 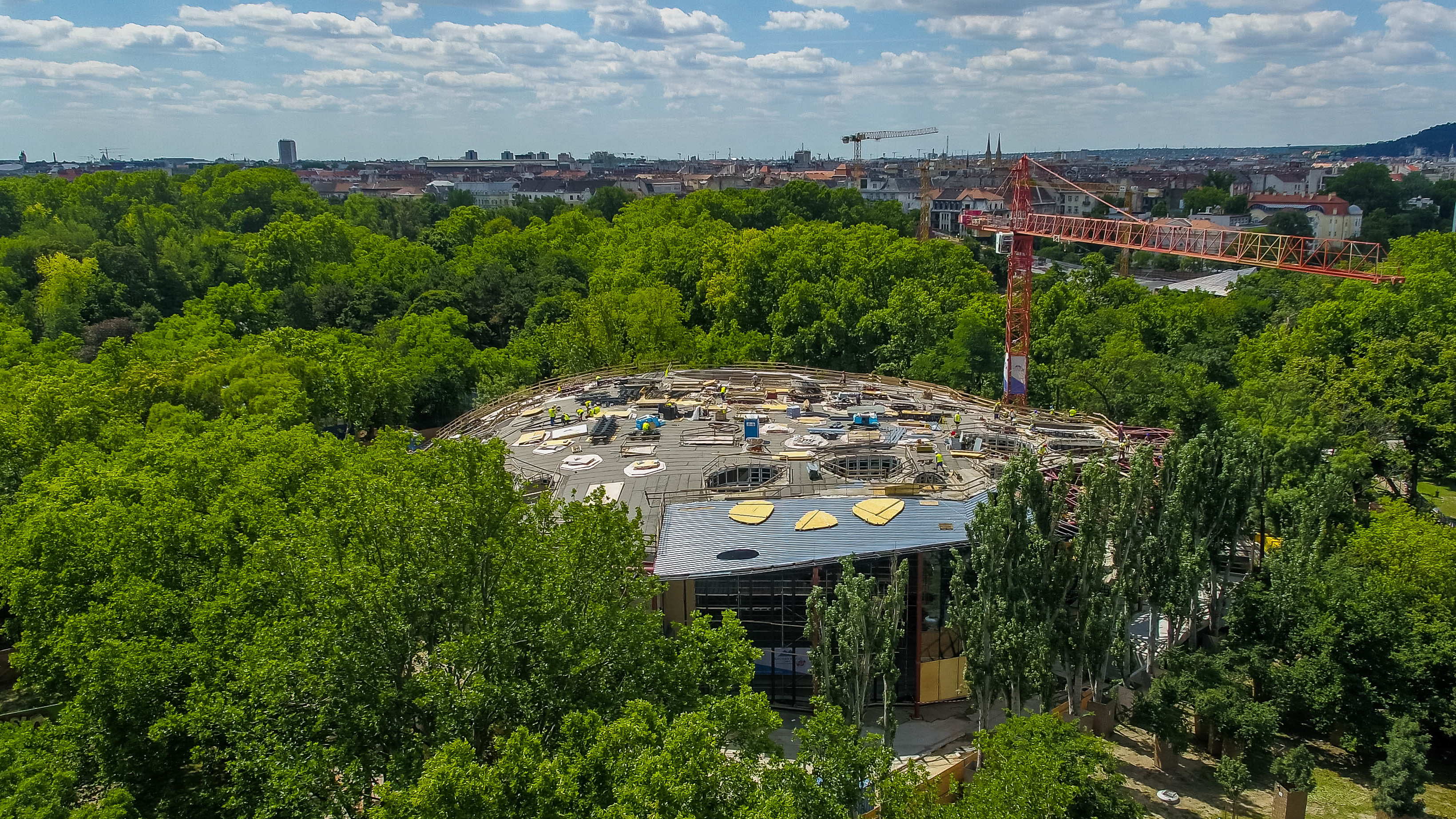 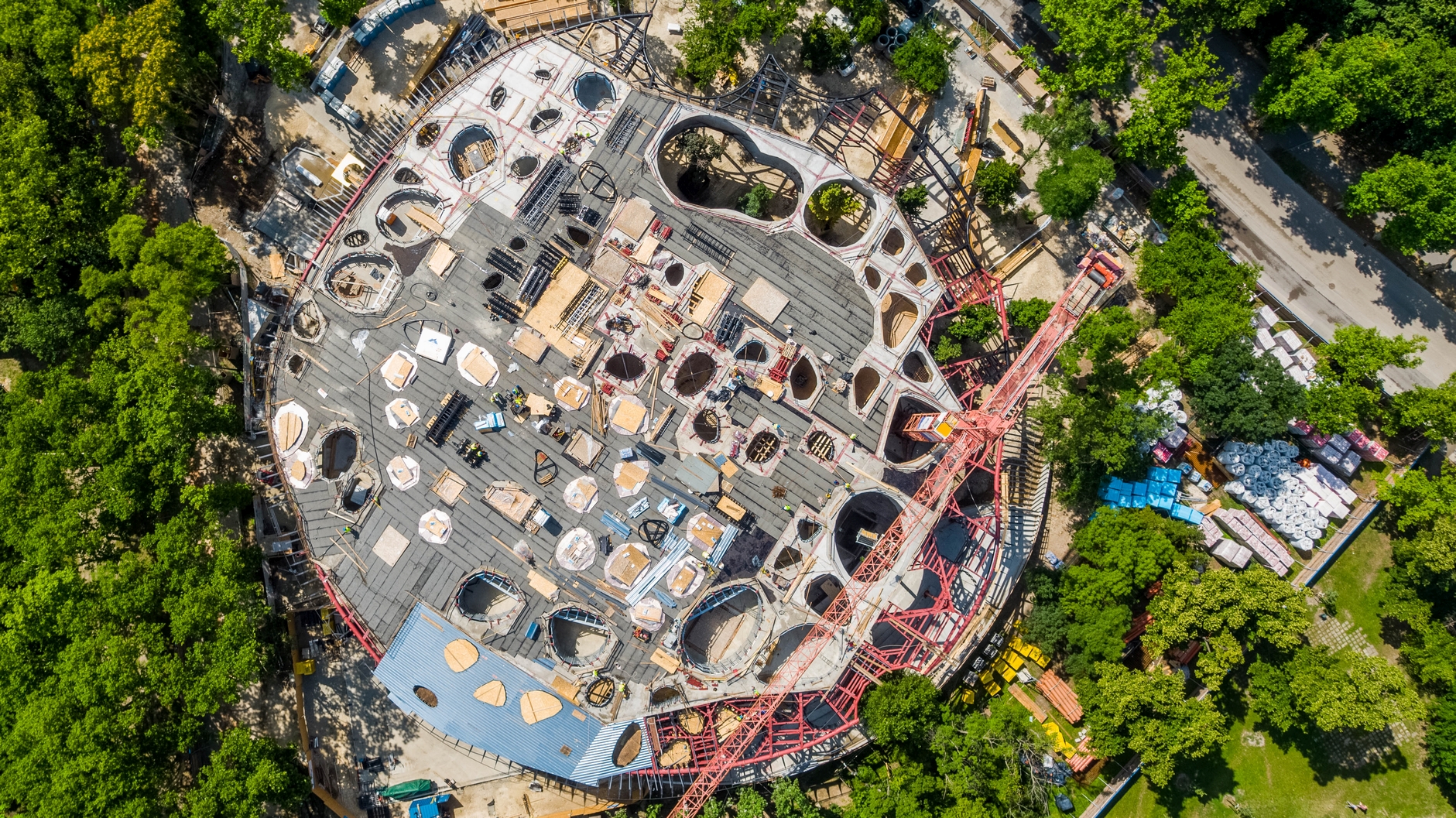 In connection with the planned amendment of the Városliget Construction Regulation, the Budapest local government published the opinions on its homepage that were expressed at the partnership negotiations organised by the Lord Mayor’s Office. These speak for themselves: 90 percent of the more than 2,000 proposals made by the various organisations and private individuals are clearly in favour of continuing the Liget Budapest Project. ″If in this matter the Budapest local government’s leadership were interested not only in the opinions of the activists who share their political convictions, it would be left with no choice but to withdraw the proposal submitted to amend the regulation,” László Baán stated.

The spectacular roof structure is ready – the building is structurally completed

The Budapest local government’s amendment cannot affect the buildings of the Museum of Ethnography and the House of Hungarian Music, the construction of both of which are already in an advanced stage. Hence, the palace of musical wonders has reached an important milestone, and the completed structure already showcases the organic vision of the Japanese star architect.

″The House of Hungarian Music, designed by Sou Fujimoto, regarded as one of the world’s most innovative architects, and built in the location of the now demolished Hungexpo Offices, will open its doors at the end of 2021 as an institution of musical initiation with a content unrivalled in the world,” noted László Baán in connection with this important milestone.

Benedek Gyorgyevics, CEO of Városliget Zrt., pointed out that ″the unique and unmistakable appearance of the House of Hungarian Music is combined with design and engineering solutions that had never been used in Hungary before. The roof structure virtually has no two parallel elements, nor right angles; everything is custom-made, the surface has almost 100 individually designed holes  in it, allowing the trees of the City Park to slip through them, while also housing one of the building’s innovative solutions: they provide the starting point of the light fountains, which will channel the light all the way to the bottom levels, while facilitating the lighting of the interiors and creating a special atmosphere.”

The top level will house the offices as well as the educational and music pedagogy functions: classrooms, a digital library and studios will facilitate educational work, thus creating an experience-based centre for popular music education providing a complex range of events for school groups and children in general, making it a venue of key importance for primary music education in regard to classical and popular music alike.

″In tandem with the completion of the upper level, the building of the House of Hungarian Music was structurally completed too; the construction works are progressing as planned and the building of the ’invisible wall’ continues. The several-floor-high, horizontally uninterrupted glass wall, which will be the largest of its kind in Europe, is being constructed according to schedule. The facade glass wall will be built from 94 custom-manufactured, heat-insulated and undivided panels, which will reach almost 12 metres in height in some sections of the building. These monumental glass elements will be supported by special glass ribs, of which 94 will be installed into the structure,” said Benedek Gyorgyevics about this phase of the construction.

He added that ″the House of Hungarian Music will be a climate-friendly building, so the use of renewable energy sources, special heating and cooling systems were already integrated into the project at the planning stage, when 120 heat pumps were planted at 100 metres below ground on a small area of the Nagyrét near the building as they will supply the environmentally conscious, renewable geothermic energy for the House. Turf is currently being laid in this area, which can soon be used by the public again. The district heating to be supplied by the machinery of the nearby ice rink and used for the cooling of the building is another special and economical technology,” stressed the CEO of Városliget Zrt.

The construction works are progressing as planned at the underground levels too, which will house the exhibition spaces among others. The engineering and electronic systems as well as the plasterboard elements are being installed now. The underground level of the house will be the venue for exhibitions awaiting the public with inspiring shows and a novel visitor experienced facilitated by state-of-the-art technology. The permanent exhibition will provide a comprehensive picture of the history of music through highlighting the most important turning points and emblematic figures in the history of European music and in that of Hungarian music in particular. According to current plans, the temporary exhibition space will open with an exciting show surveying the last fifty years of Hungarian pop music. The same level will also be home to a hemispherical sound dome, where special sound technology will be used to create sound spaces, allowing visitors to journey through the musical and visual worlds of various places.


The function and mission of the House of Hungarian Music

In regard to its function, the new facility will be a place of musical initiation bringing the rich Hungarian musical tradition to all its visitors, Hungarians and foreigners alike, through content unrivalled in the world in its complexity, interactive permanent and temporary exhibitions utilising 21st-century technology as well as music education workshops, music events and those linked to music, complemented with open-air concerts evoking the atmosphere of the music pavilions of old.

″What makes the House of Hungarian Music one of its kind is that the triad of exhibitions, live music and music education will be found here, at one venue. Visitors will be able to embark upon a journey through music thanks to diverse programmes: the underground level will cater to exhibitions, where a permanent exhibition with interactive and spectacular elements will guide visitors through the history of music,” said Ministerial Commissioner Baán.

The temporary exhibitions will also be found at the underground level along with a unique sound dome, which will be a special hemispherical cupola where diverse sound spaces will be created using special audio and projection technology. The ground floor will be home to lecture halls and an open-air stage, which is envisioned to provide an opportunity not only for well-known but also for fledgling musical formations to perform. The first floor will be the venue for music education events and a digital library.

″The mission of the House of Hungarian Music includes education, and a special team was set up to develop the facility’s music pedagogy concept and programme,” noted András Batta, the head of the House’s professional work team. Since education and the dissemination of music are a central element in the profile of the institution, a professionally high quality music pedagogy programme harmonised with museum education is needed. Performed music, interactivity and providing an experience will form a key part of exhibitions to be held here. ″something becomes an experience if people feel what they hear, sense, feel, store and later recall as their own. That is exactly why it is important that all that visitors encounter here will be stored in their memories as real experiences,” added András Batta.

The House of Hungarian Music will provide an extremely wide range of games providing genuine experiences for children, spanning from instrument laboratories and instrument-making workshops to musical composition, conducting, musical drawing, singing and making music together and a mini dance house. Trained museum and music educators will welcome children, but it will be possible for music teachers to bring their classes here and guide them through the House. Teachers will also be able to choose one of the theme-based walks in advance, for which they can prepare themselves and the children before coming to the House using the educational materials downloadable online.

The House of Hungarian Music, which won the Best Public Service Architecture Award at one of the world’s most prestigious international property competitions last year, will be built near the City Park Lake, between Vajdahunyad Castle and the Ice Rink, on the site where the dilapidated Hungexpo Offices stood unused for years. The new institution of c. 3,000 square metres will be constructed above ground on a nearly 10 thousand square-metre area thus far fenced off to the public, thus thousands of square metres of renewed green area will be available to visitors to the park. The environmentally friendly building designed by the world-famous Japanese architect, Sou Fujimoto (Hungarian partner: M-Teampannon) expressly seeks to provide a harmonious transition between the built and natural environments by creating a visual continuity between the external and interior spaces, while catering to the requirements resulting from the unique function of the facility.