After long discussions and preparations, Budapest's most complete dog adventure park opened in 2018 in an area adjacent to Hermina Street and Városliget Boulevard. A large green oasis: the perfect location for running around and playing.

For dog owners who live in apartment blocks surrounded by concrete, it's not always easy when their four-legged friend wants to play. Unfortunately, although Budapest has plenty of dog parks, most of them are not well-maintained or properly equipped. Which is why a play area for dogs was included in the first phase of the renovation of the Városliget. To ensure nothing will obstruct your dog's carefree playtime, the Dog Park is separated from the rest of the part by a 1.2 m high fence surrounded by shrubs.

The popularity of Hungary's best-equipped dog adventure park has surpassed all expectations, with an average of 750-800 dogs playing every day, and certain weekends seeing up to 1,000 owners coming to let their dogs play at this special venue. In addition to the completion of the Dog Adventure Park, the park's total green space by more than 5,000 m2 and the range of dog-friendly facilities have been expanded, though the rules for walking with your dog throughout the Városliget have remained unchanged.

This special section of Városliget is equipped with state-of-the-art play equipment and a wide range of apparatus, including a slalom, bridge, jumps, tunnels built into a hill and a pedal-operated water basin. There are also some small sandy areas so dogs can dig freely if they are in the mood.

The Dog Adventure Park has a total area of 5,280 m2, with four entrance gates and three sections divided according to function. The first area is situated next to the Pántlika restaurant. Dogs can test their skills with an agility course of uneven terrain featuring jumps, bridges and hidden tunnels alongside slaloms and jump tracks. In the centre of the agility course there is also a 60 m2 sandy area where pets can enjoy the simple pleasures of digging around.

At the end of the digging area, on the western side, your dog can cool down or relax in the 70 m2 dog paddling pool area, particularly useful on hot summer days. Specially designed for our four-legged friends, this water fun space contains 10 cm and 20 cm-deep pools. Each pool has a drain so the water flows out into the drainage system. The basins are made of basalt concrete, separated from the soil with geotextiles.

In the section located close to Hermina Road, the renovation included the creation of a large grassy area for the most active dogs, while there is also an outside tap near the Városliget Boulevard entrance so owners can wash their pets down. The planned public lighting also means that the area will be suitable for late-night walks without a lead at night or in winter.
While of course there were plenty of compromises and negotiations to worry about when planning the new development, we didn't forget the importance of the comfort of dog owners, who can relax on benches while their pets run around with their new pals. We also paid close attention to the smaller details, placing plenty of dog waste stations and drinking fountains in the area, after dog owners reported that a lack of such facilities previously caused them the most problems. 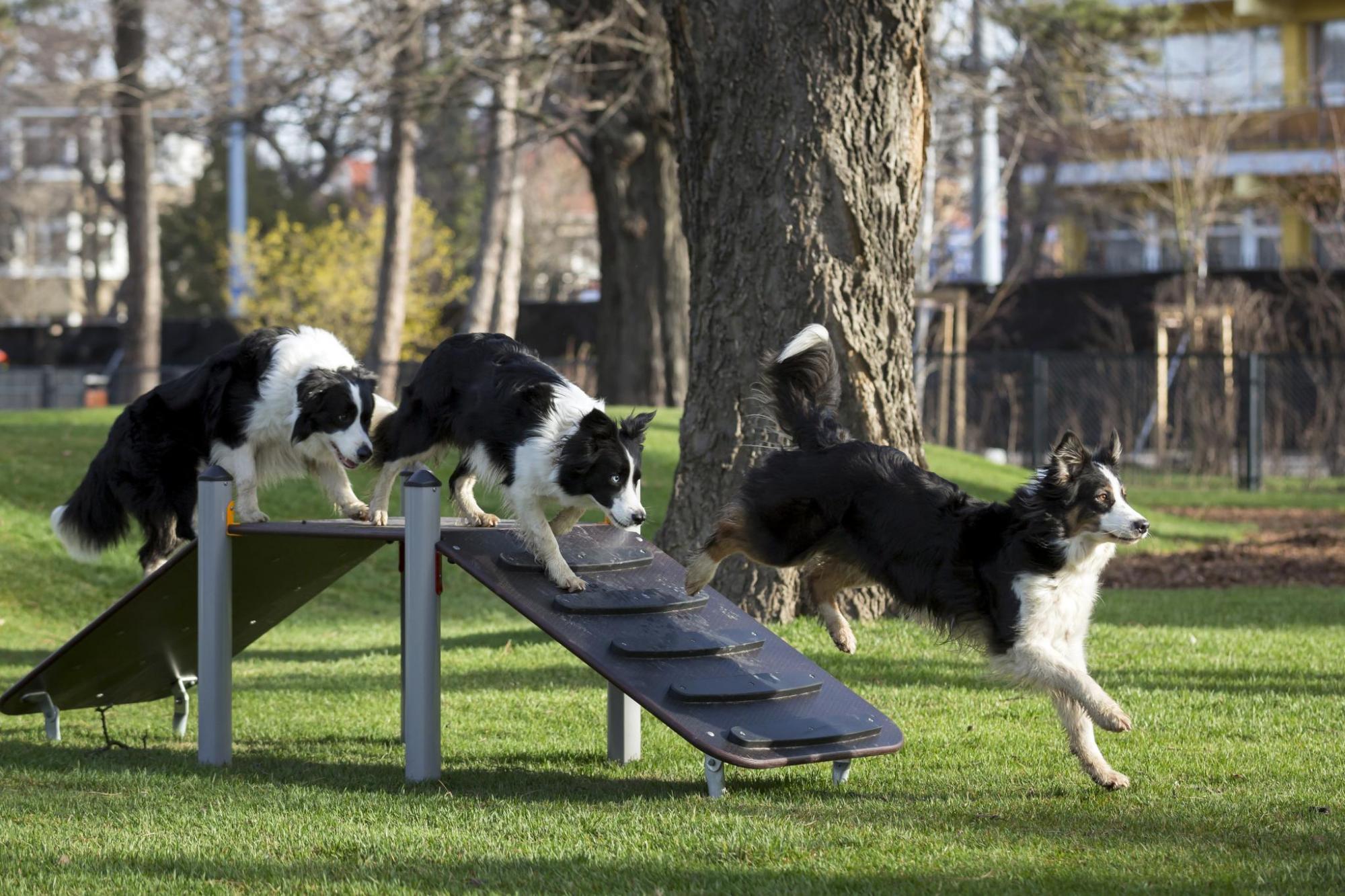 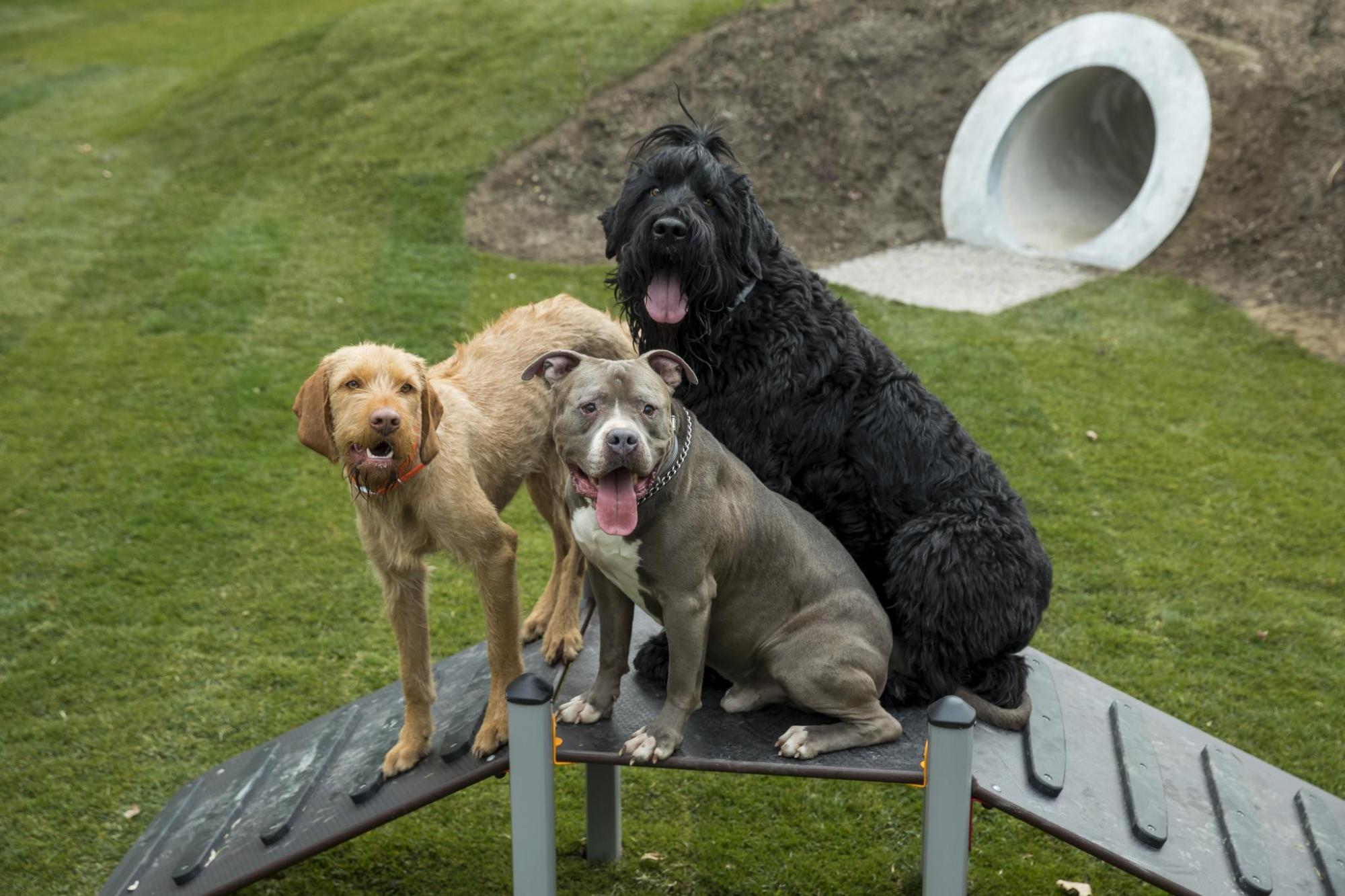 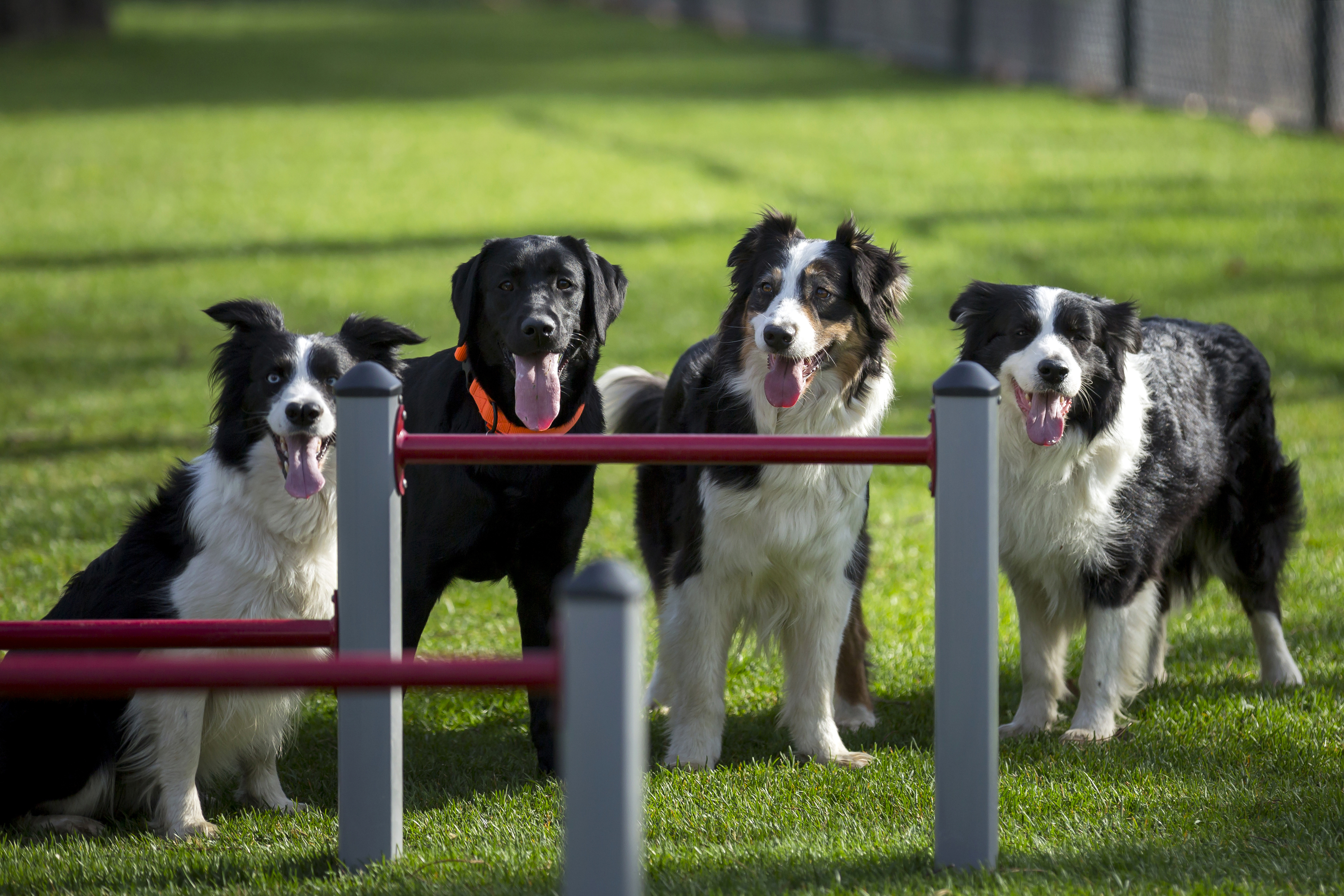 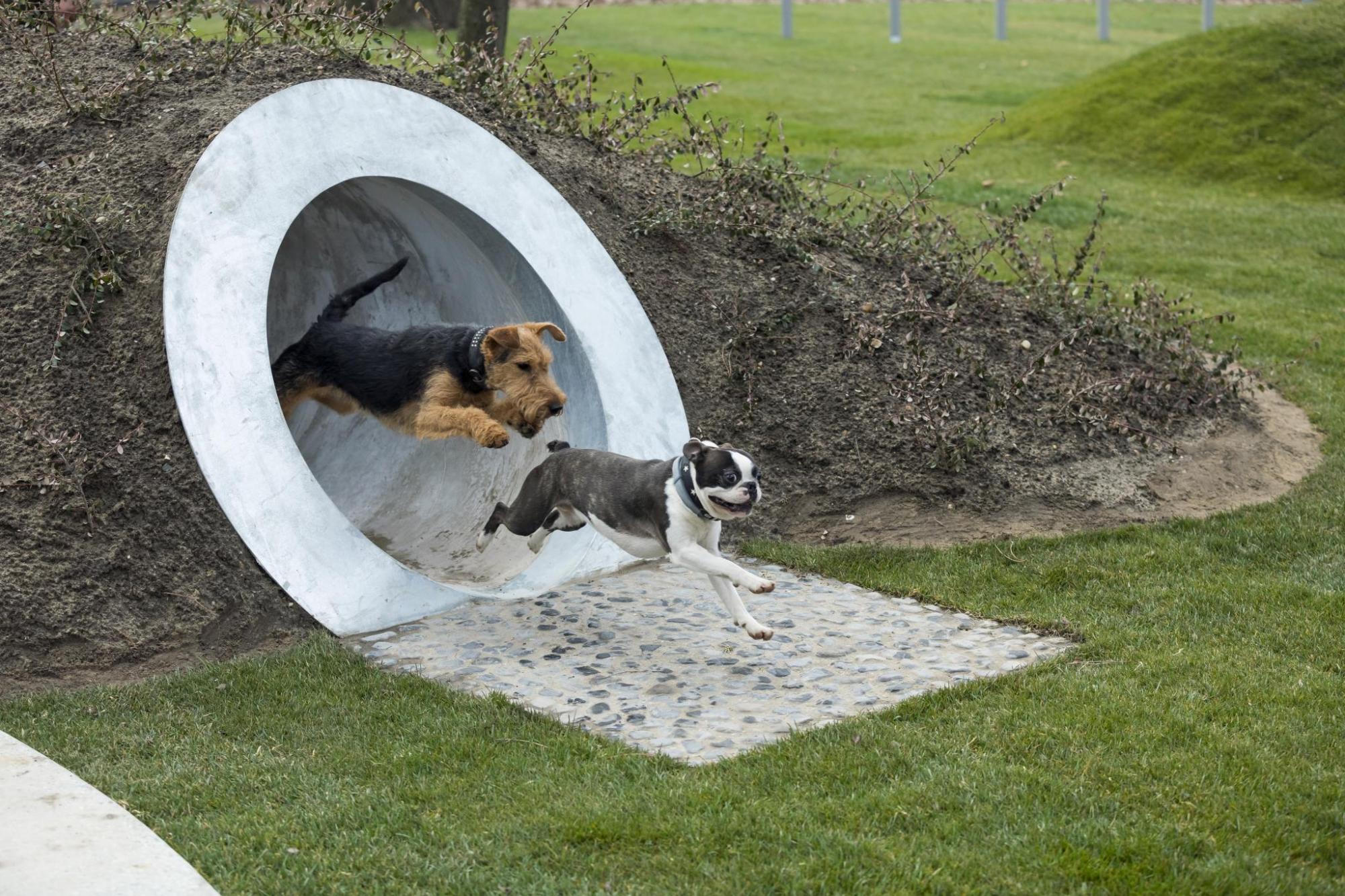 How was it made?
The opening ceremony was preceded by a shorter trial run, giving lots of dogs, owners and organisations the chance to test the new Dog Adventure Park, which was designed by Garten Studio as part of the first phase of the Liget Budapest Project. The experiences were extremely positive, and the feedback showed us that both the owners and dogs are happy with the results, while the various organisations were pleased to find that their requests have been met and reported that they liked every aspect of the park.

"All the dogs went crazy and were really happy to discover the bath area and games... it was a great experience to see that it's finished and in the way we had planned," said Berta Csonka, president of EB OVO Public Benefit Association.

The designers have made further refinements in the area based on the feedback from the testers to ensure that the completed Dog Adventure Park, located on the border of Hermina Street and Városliget Boulevard, meets the expectations of its users in line with the principles of modern urban dog ownership.

Of course, the complete renewal of the Városliget means that greater attention and awareness is needed from dog owners. It is essential that dogs are not allowed to dig up any flowers and young trees or harm the new park that is here for the enjoyment of all. The park officially opened its doors to park users and their four-legged pets in May 2019 and is free to visit 24 hours a day. 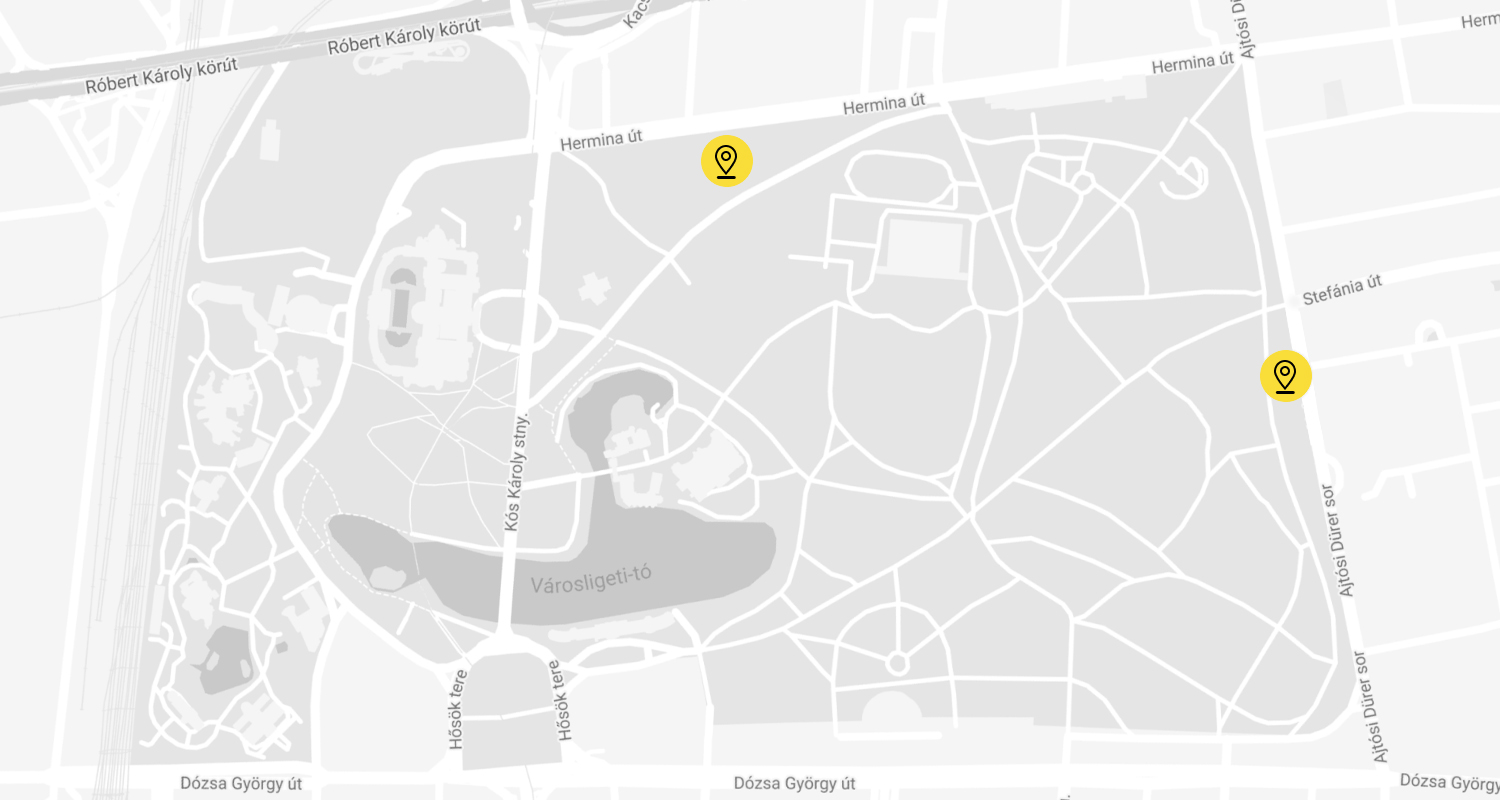