2019/07/22
By the middle of next year, all of the major improvements to the Városliget will have begun, and two-thirds of them are already underway or completed. The work of the Liget Budapest Project is progressing nicely, with all of the new buildings expected to be up by 2022, reported László Baán, ministerial commissioner responsible for the Liget Budapest Project. He highlighted the fact that 2019 has already been a year of deliveries, as Prime Minister Viktor Orbán handed over the National Museum Restoration and Storage Centre (OMRRK) building to representatives of the museology profession in May, and this will be followed in the autumn by the opening of the former Olof Palme House, newly renovated and renamed the Millennium House, together with the Rose Garden in front of its entrance, a new addition to the Városliget.  Also in the autumn, families will be able to start using one of Budapest's largest and most complex playgrounds in the Városliget, and work on the Komárom Star Fortress building  will be finished as well.

"The construction work in the Városliget and the renovation of the park had both started by last year.  Two-thirds of the planned improvements are already underway, and if we continue to work at this pace, then all of the new buildings will be up by 2022. In that case, all of the new institutions will open by 2023, and the expanded park will be in its full splendour, with its green space renewed. The Liget Budapest Project is the continuation of the Városliget's own historical tradition, one that is more than a century old: the Liget simultaneously offers a uniquely rich selection of culture, entertainment and relaxation in a green setting to choose from.  After its comprehensive renewal, the Városliget will be a completely unique trademark for Hungary, as there is no other urban park anywhere else in Europe providing visitors with so many cultural institutions and recreational opportunities of such a high level of quality," said László Baán.

About this year's deliveries and plans:
In may of this year, Prime Minister Viktor Orbán handed over the National Museum Restoration and Storage Centre (OMRRK) building to representatives of the museology profession. Housing one of Europe's largest and most modern organisations dedicated to supporting museums, the building is located next to the Városliget, on Szabolcs Street, on the site of a former hospital. After the building was delivered, the installation of the technical museum equipment began: currently in the complex, the artwork storage facilities are being fitted out, which involves installing rail-mounted shelf, drawer and cantilever racking, as well as pull-out art racks. All of this is taking place in parallel with installing and putting into operation the special technical equipment for the restoration studios. "This ultramodern building is of key importance to the Museum of Fine Arts, the Hungarian National Gallery and the Museum of Ethnography, as it is of inestimable value to these institutions and will safeguard 300,000 pieces of stored materials, finally under the world-class conditions that these national treasures deserve. The 20-billion-forint project presents a reassuring long-term solution to the decades-old problems of assembling and storing national public collections," Baán emphasised.


The reconstruction of the Olof Palme House, a monument over 130 years old that has been deteriorating in recent decades, has also been completed.  One of the oldest and most beautiful buildings in the Városliget, it will reopen this year with a new name, the Millennium House, and with a seasonal exhibition showing the heyday of the Városliget, which will later be followed by a permanent interactive collection evoking the most successful period in modern Hungarian history, with a focus on fin-de-siècle Budapest. The opulent Zsolnay ornamentation on its facade has been restored, and soon the interior architectural work and the installation of the temporary exhibition will also be finished. To be situated in the middle of the Rose Garden-side entrance will be a unique fountain, which the Zsolnay factory in Pécs has started to produce in the past few days. The construction of the Rose Garden itself, which will be connected to the building, is also in progress, and the rosebushes will arrive on the site in August. The 3-billion-forint restoration of the Millennium House that began at the end of 2017 is being realised in line with the building's original architectural documentation.

"The Millennium House will be one of the revamped Városliget's gems, while also serving as the symbol of the Liget Budapest Project's objectives. One of the Liget's oldest and most beautiful buildings will host a centre for learning and recreation that integrates the park with culture while also respecting tradition, along with a café with a unique atmosphere," said Baán.

Thanks to the Liget Budapest Project, the reconstruction and expansion of the Komárom Star Fortress has also been completed. The building complex and its environment have been beautifully renovated, and have been supplemented by a new cultural centre of more than 7000 square metres, with modern exhibition space. This is where the pieces from the Museum of Fine Arts' neglected collection of plaster replicas – copies of outstanding works from the world of sculpture from antiquity to the Renaissance – will find a home.  The large-scale statues are currently being moved in, installed and organised in a permanent exhibition, and the institution will open its doors to visitors in the first half of next year.

Other iconic developments will kick off at the end of the year and the start of next year. With the construction of the New National Gallery, designed by the Japanese architectural firm SANAA, one of the best in the world, and the House of Hungarian Innovation, which pays homage to Hungary's inventive genius, as well as the rebuilding of the art nouveau Városliget Theatre, which had been demolished in 1952, the planning process agreed with the institutions approaches its end, and after the procurement process is completed successfully, construction can begin at the end of the year or early in 2020.

"The acceptance of the delivered partial projects completed so far also indicates that people are going to love and take pride in the entire renewed Városliget," said Baán. He reminded everyone that as early as last year, visitors to the Városliget could start to look at more than design plans, as completed parts of the project were already opened to the public. The Garden of the Blind, the Youth Sport Facilities and the Dog Adventure Park have all proved highly popular, with the number of visitors to the latter already exceeding 300,000, and after reopening at the end of October following the biggest reconstruction in the Liget Budapest Project, the Museum of Fine Arts went on to admit record numbers of visitors. 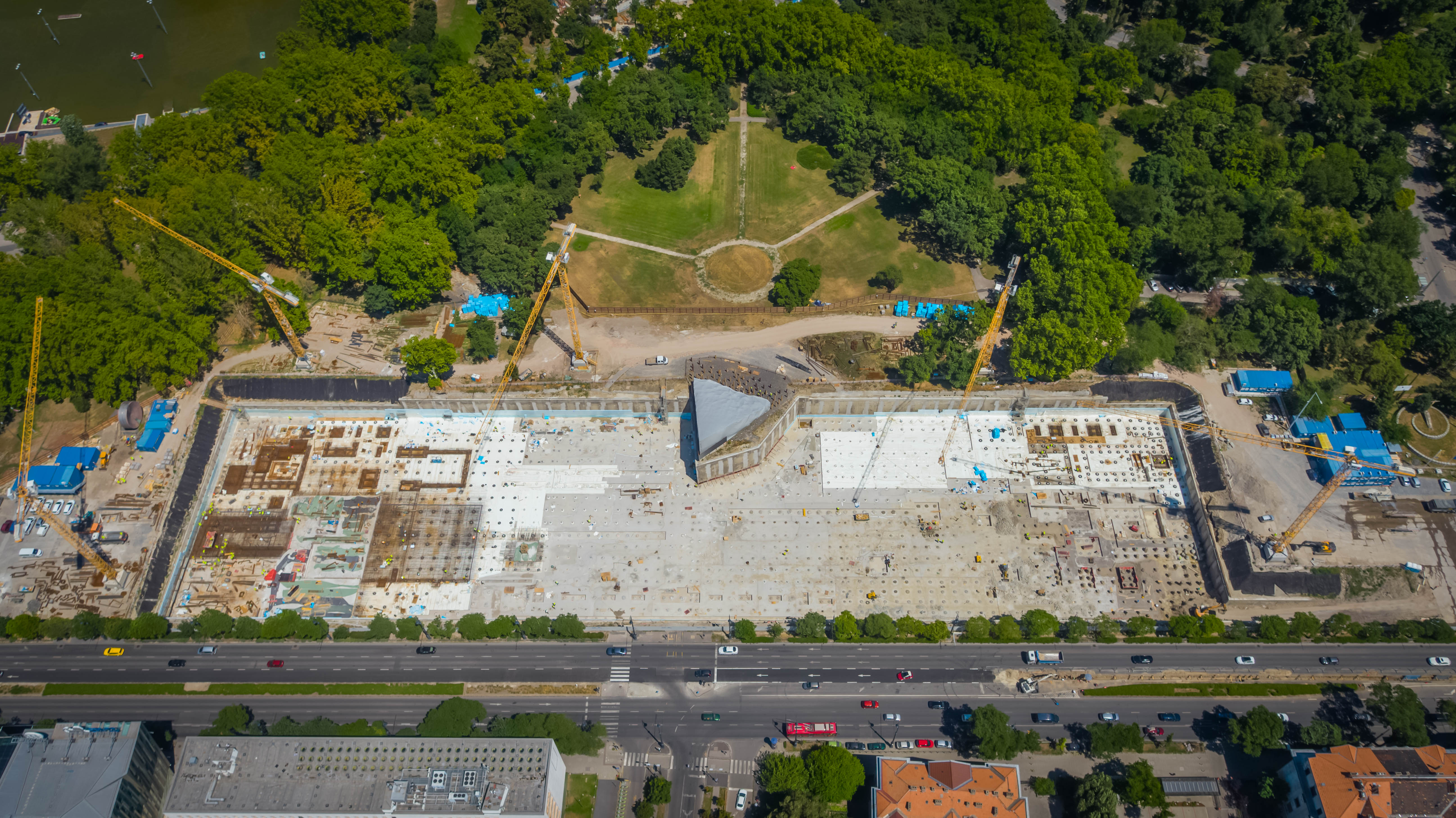 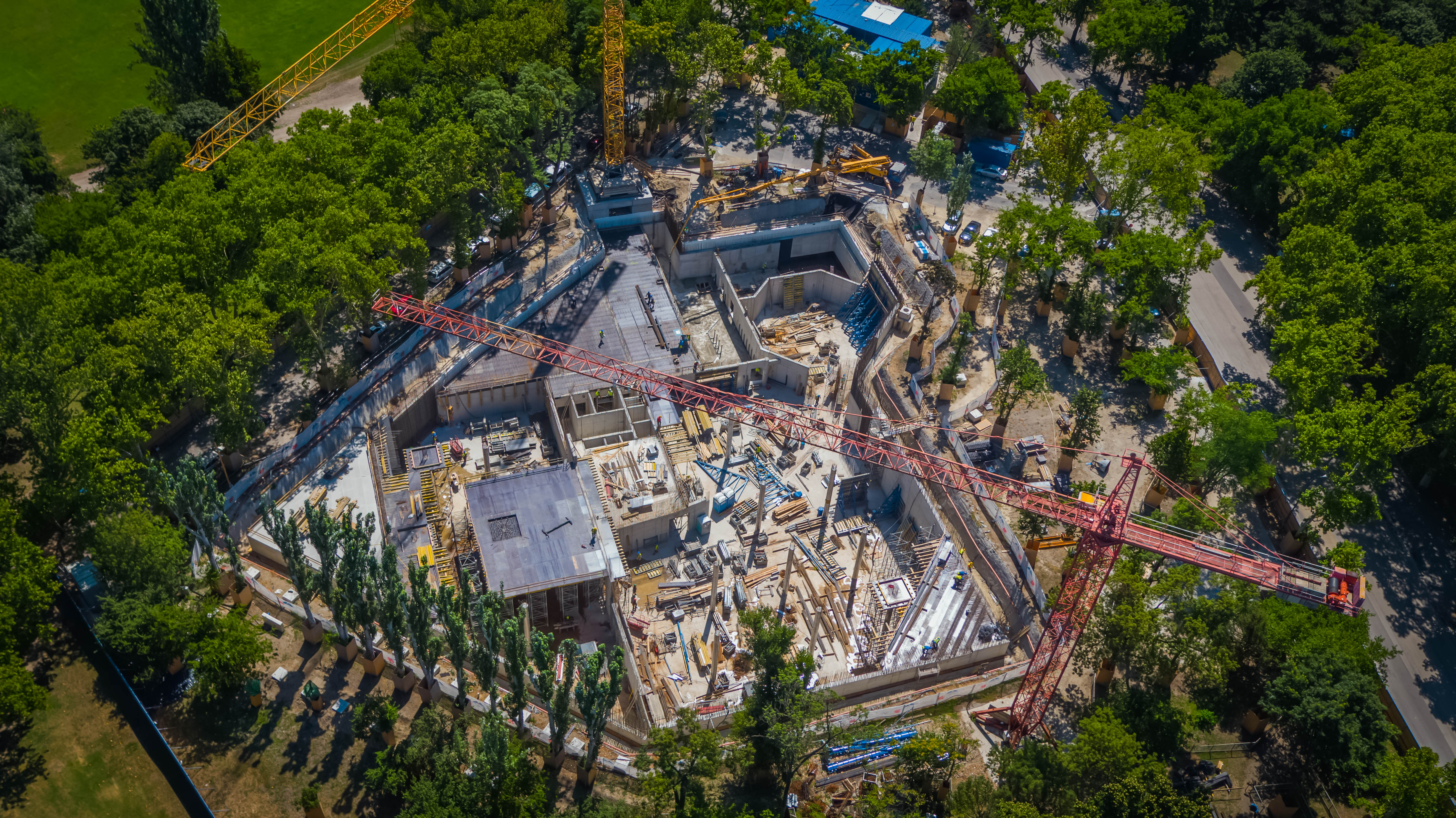 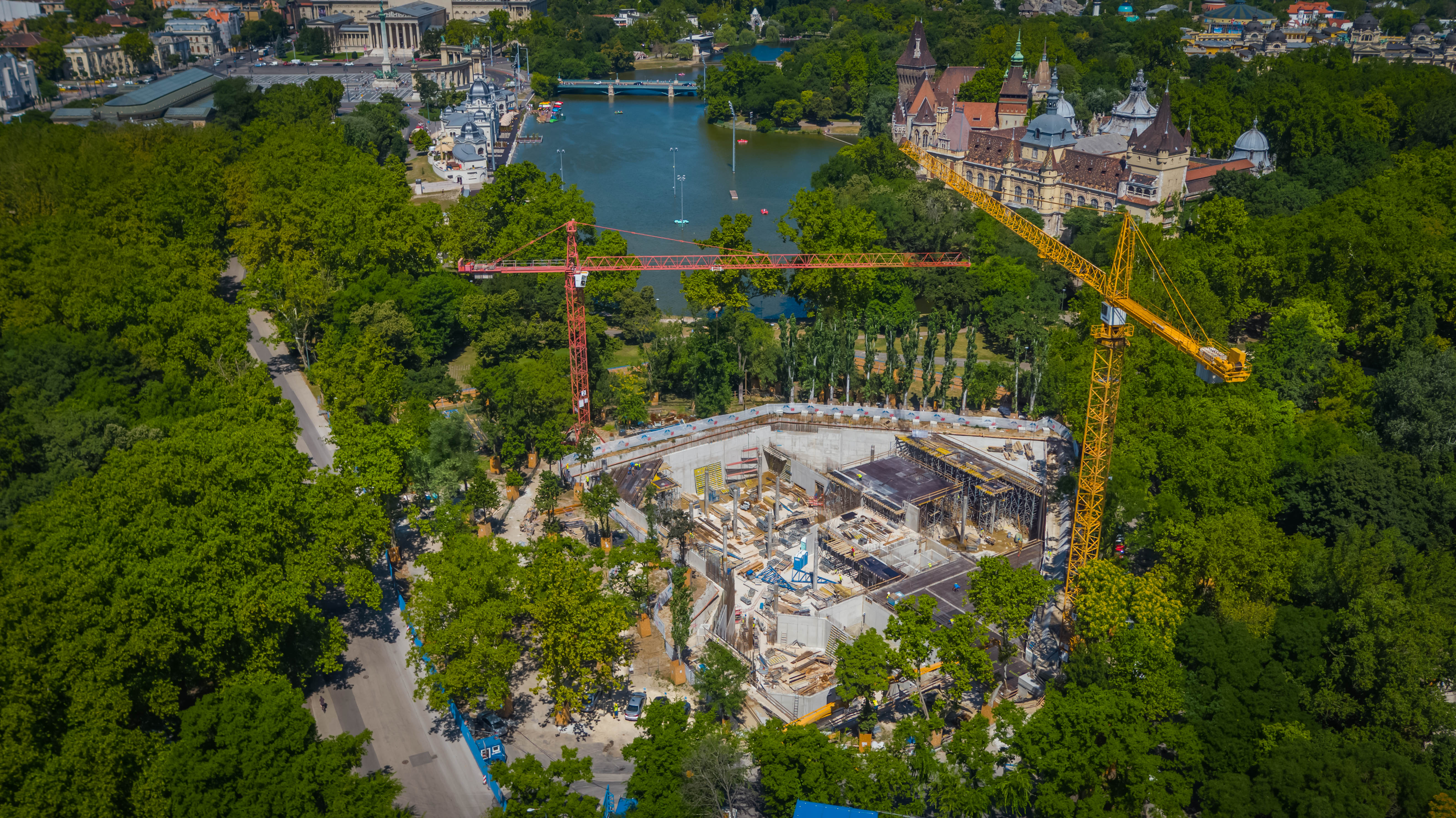 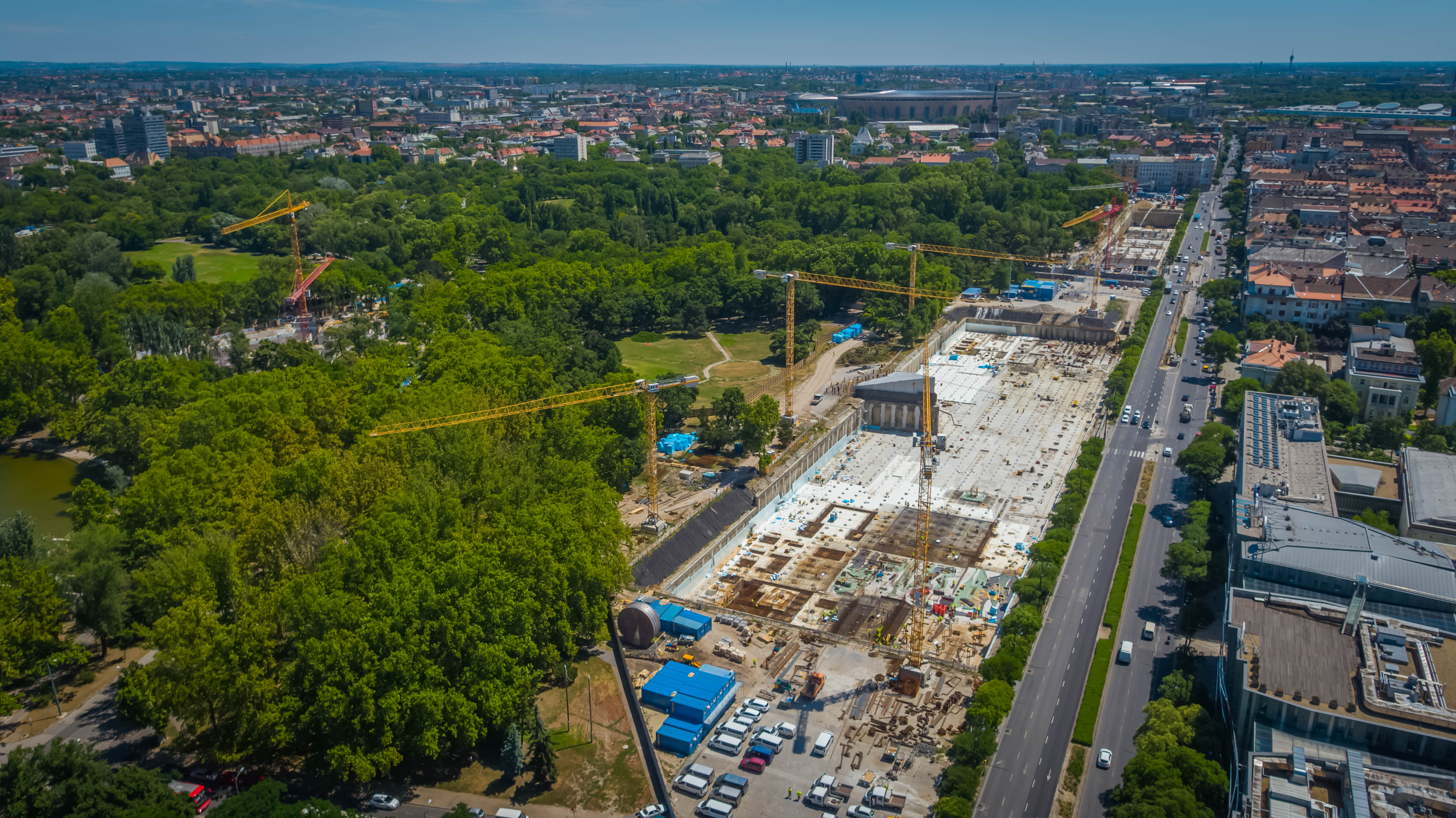 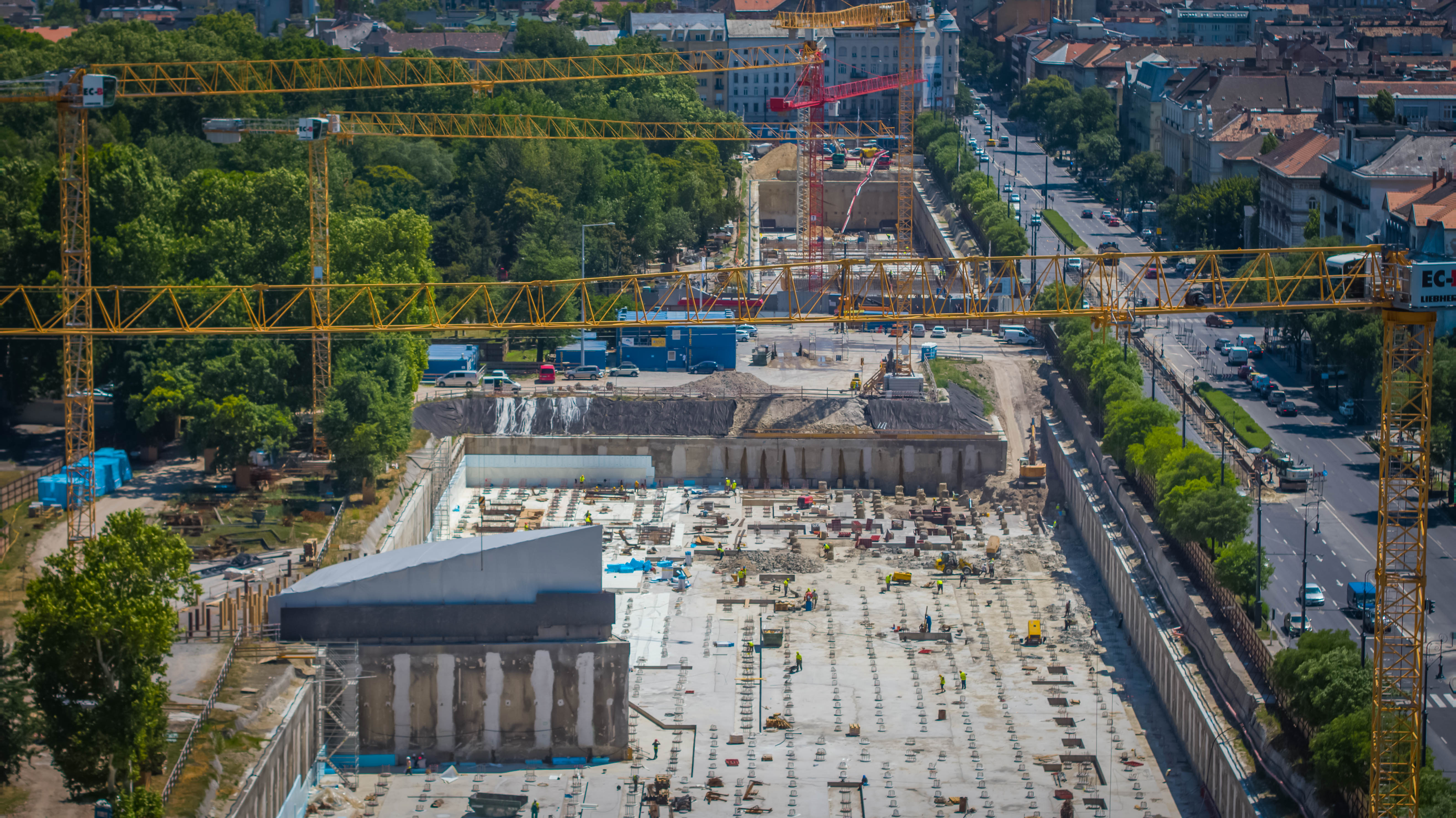 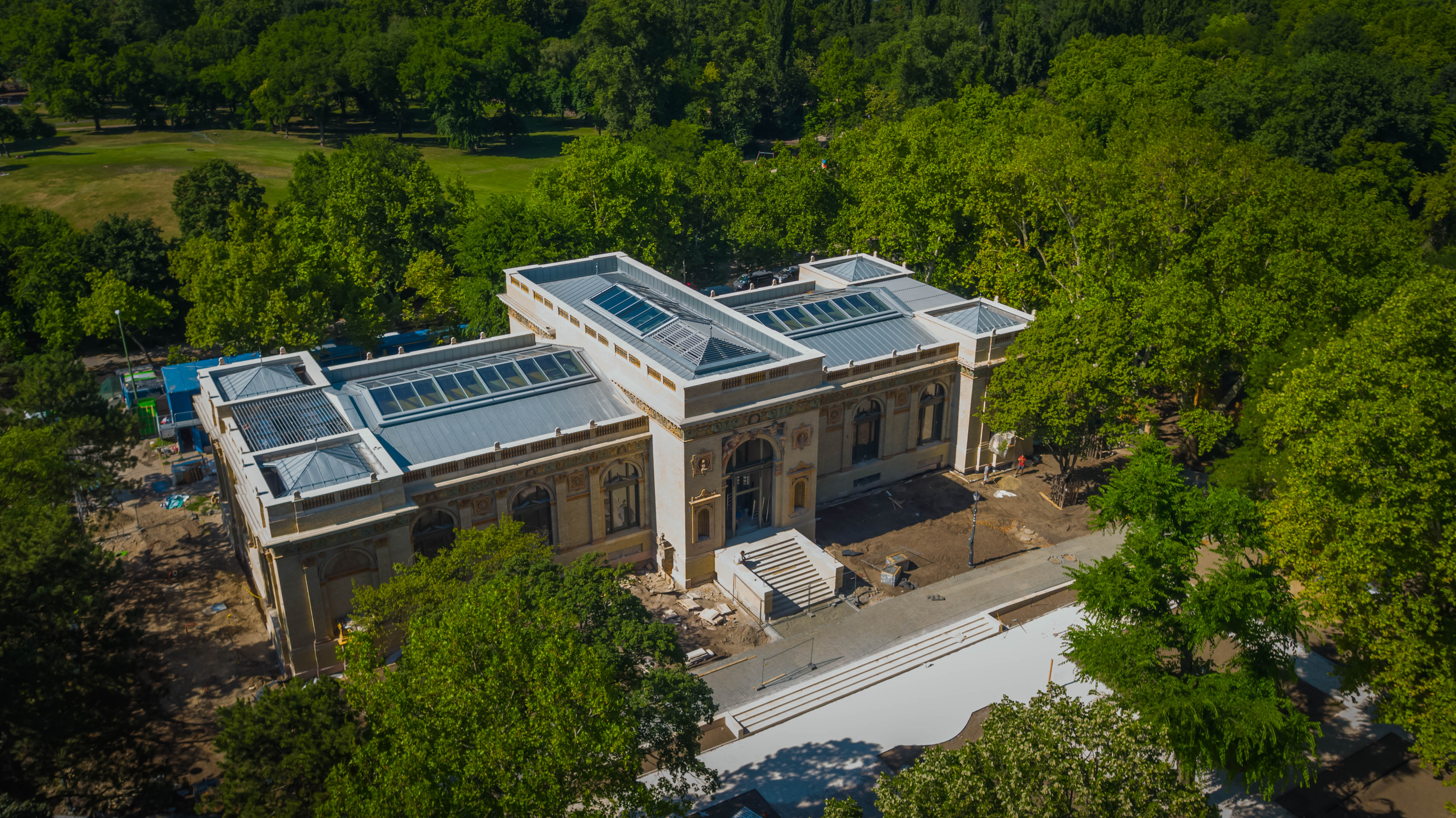 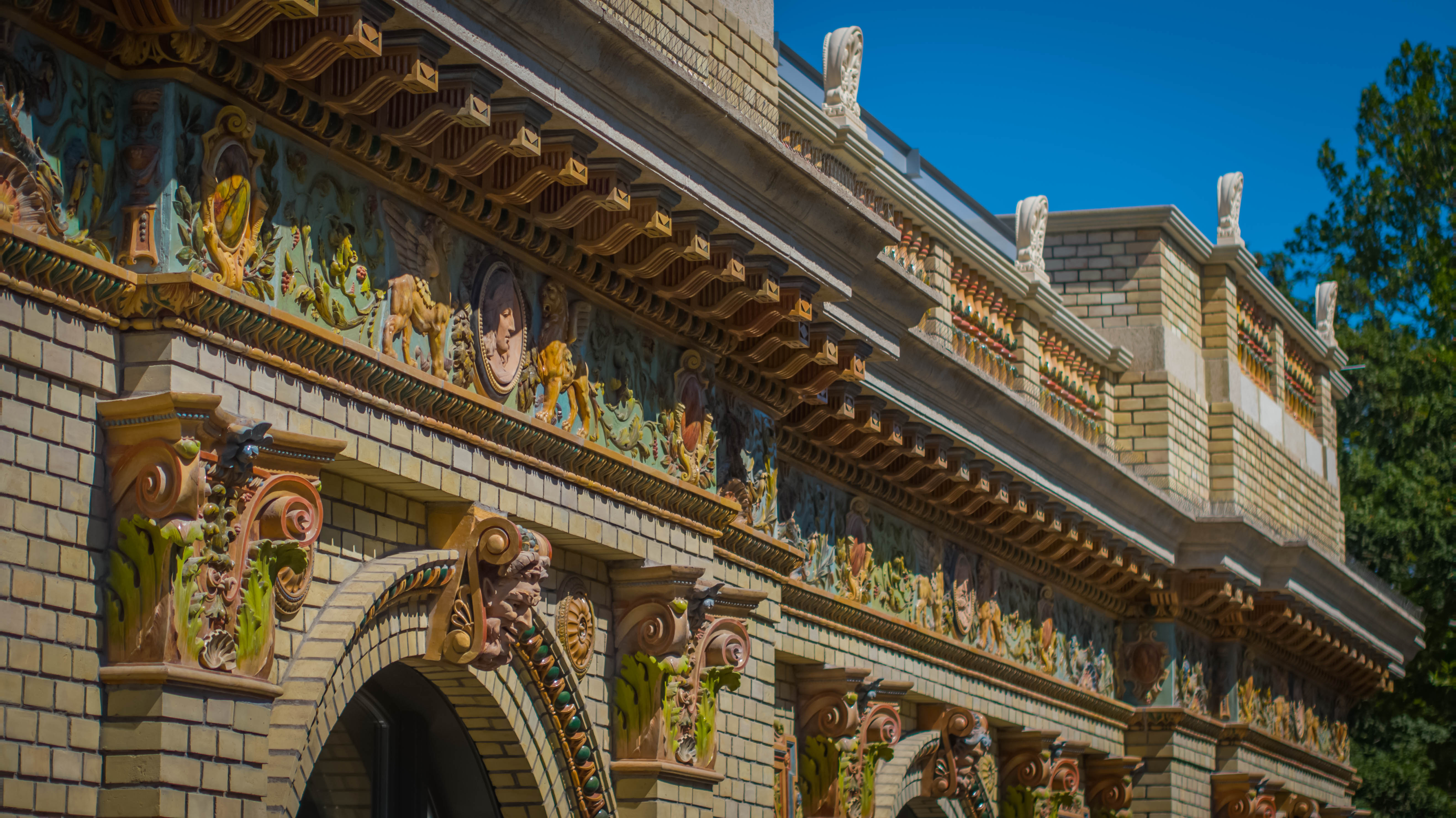 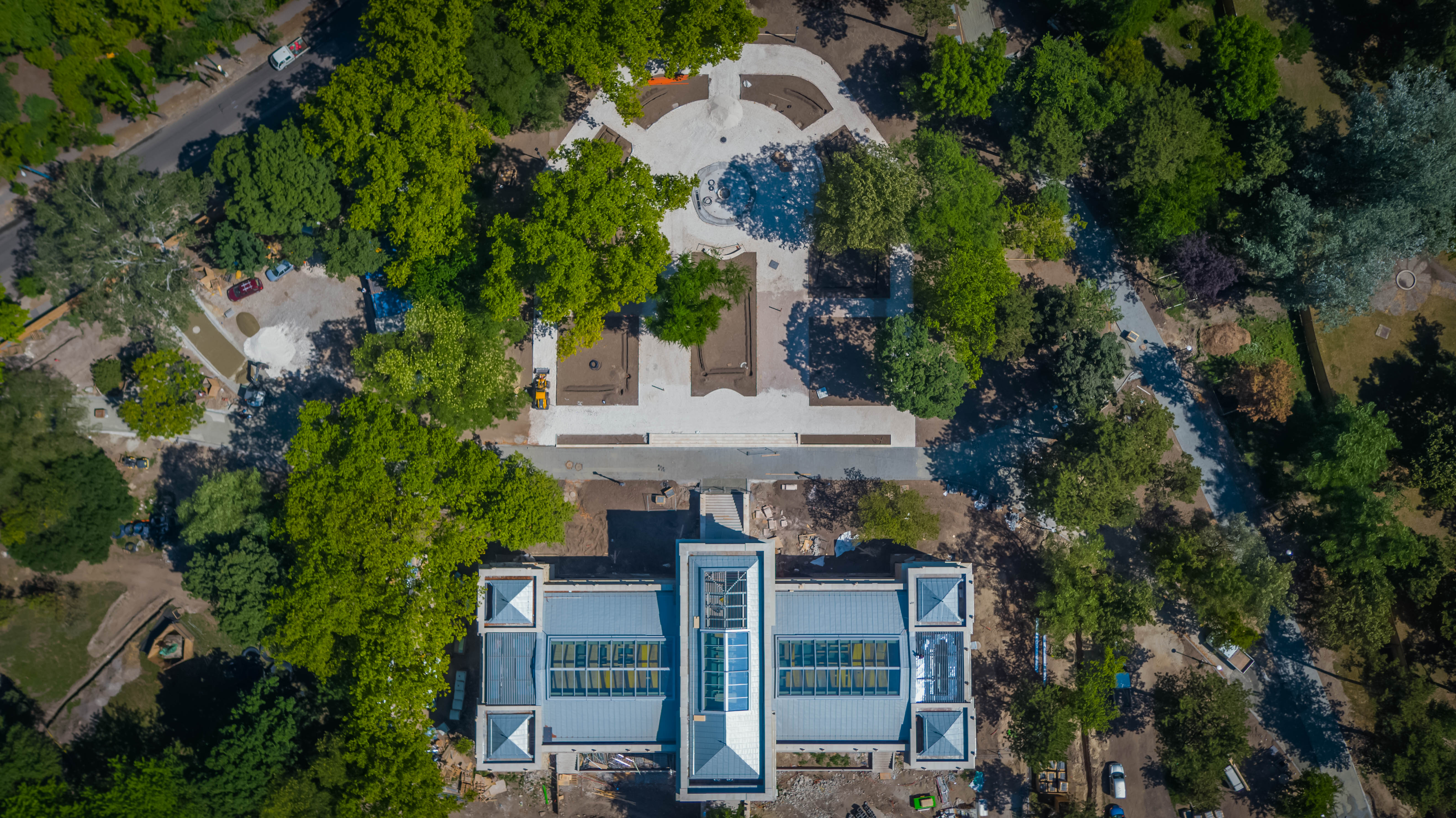 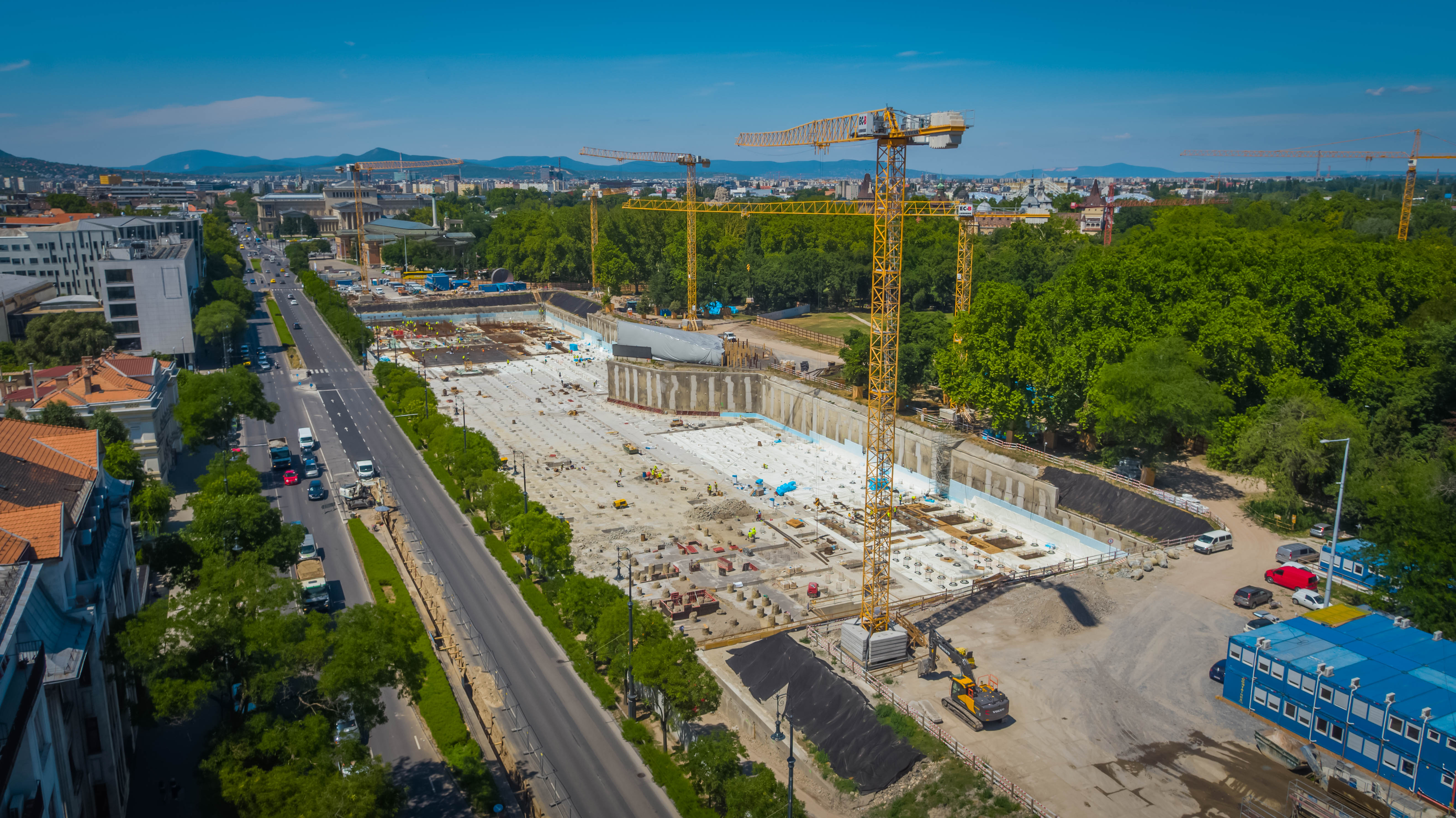 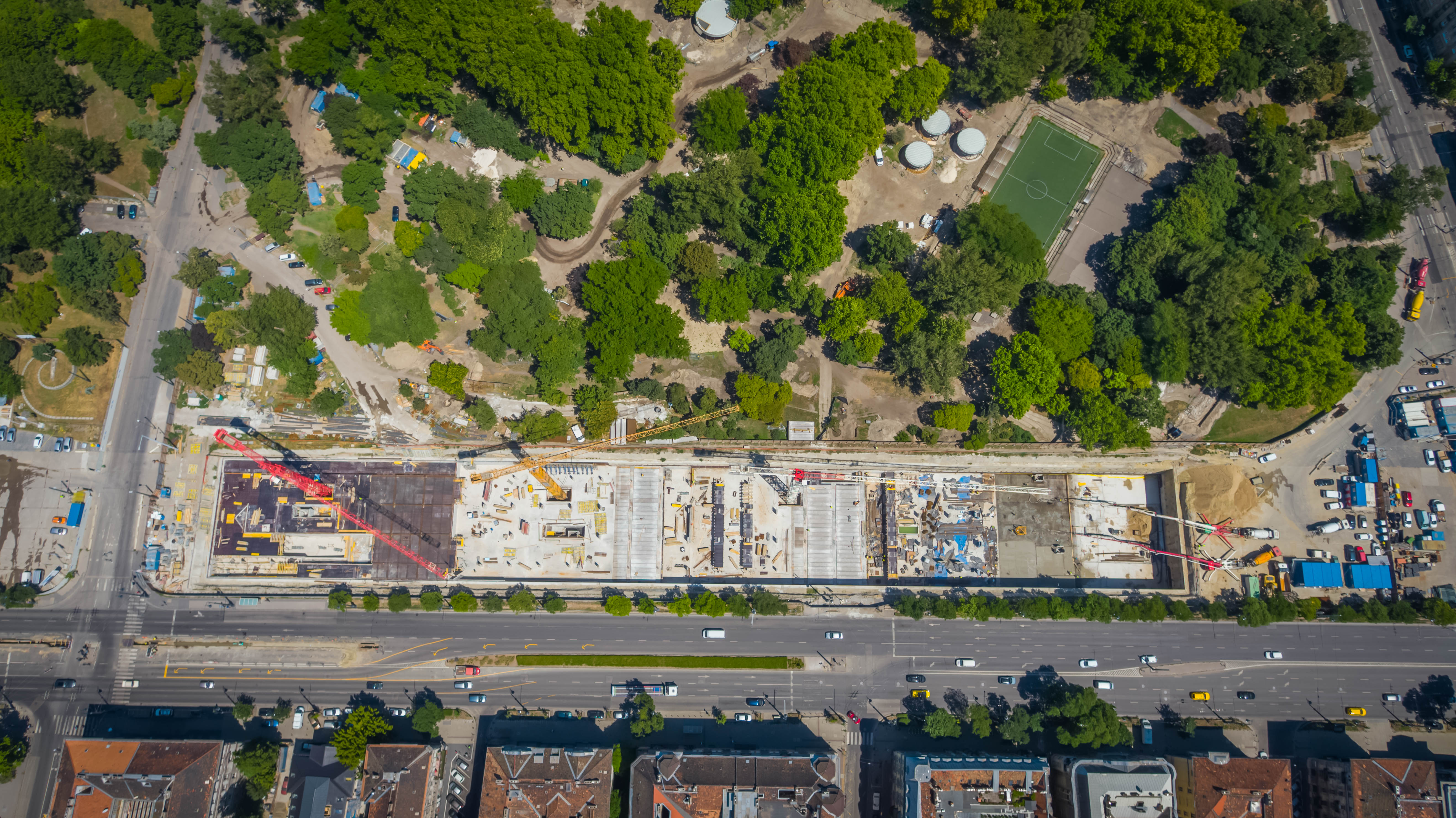 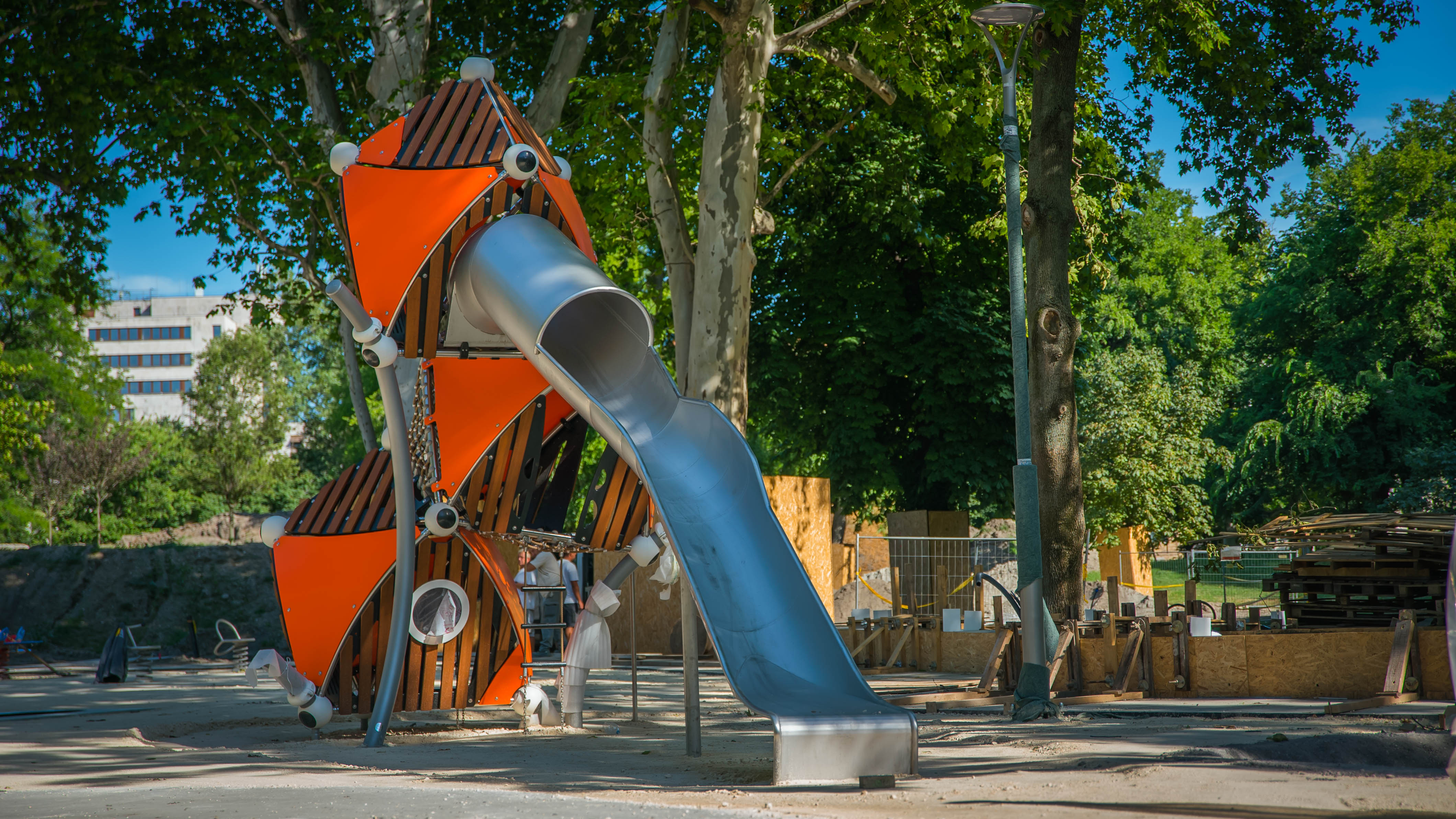 As Benedek Gyorgyevics, the CEO of Városliget Zrt. the company responsible for implementing the Liget Budapest Project, emphasised, "The projects completed as part of the first phase of the park's redevelopment already show the singular – even by European standards – level of quality and thoughtfulness that will characterise the entire rehabilitation of the landscaping." He also said that 2019 marked the start of the second phase of the park's development, in which one of the biggest and most modern playgrounds in the country will be constructed in the Liget and ready to welcome children in the autumn of the same year. The construction work is already in an advanced state, with the play equipment – each piece surrounded by safe, fall-mitigating surfaces – also now installed in the area dedicated to the smallest visitors. In the next phase of the work, play equipment for older age groups will also be installed. The Main Playground offers each age group a separate network of slides, along with nest, circle and hanging swings, rope courses, rotating play equipment, equipment for individual and doubles kicking games, trampolines, various sandboxes and water games in a total area of more than 13,000 square metres. As part of the family-friendly developments, the Városliget will host a total of seven new or renovated playgrounds. Also to be developed in the second phase of the park's redevelopment will be additional athletic grounds and a new two-kilometre illuminated running track.

Gyorgyevics emphasised that the Városliget and its nearly one hundred hectares of parkland are being renewed in several phases, with an important factor being that most of the Liget should always be open to visitors throughout the entire process. "With the implementation of the Liget Budapest Project, we are returning to the century-old traditions of the park in such a way as to ensure that they be maintained over the long term as well. The park is being renewed in terms of both quantity and quality: the new Liget will be both greener and more modern than the current one. As in its golden age, the renewed institutions, harmonically integrated into the park around them, will provide everyone with something new to love," the CEO said.

The state of developments currently in progress,

Gyorgyevics said that of the parts of the project that are currently in progress, the construction of the iconic Museum of Ethnography building has been underway since the end of 2017, and last year was recognised as "Europe's best public service building" at the International Property Awards, where it won the special prize in the "World's Best Architecture" category, one of the most prestigious recognitions in the property profession around the world.  Currently being completed is the underground work on the building, with the foundation ready and work on the underground structure and insulation in progress. Above-ground work will commence in due course. The museum will be structurally complete by the end of next year.

With the underground construction phase finished on the House of Hungarian Music, the foundation and internal insulation is now ready, and work on the columns and supporting walls is now underway. Within one year, the remarkable building designed by world-renowned Japanese star architect Sou Fujimoto to occupy the former site of the Hungexpo office building will be structurally complete.

Work on the Dózsa György Street underground garage is in an advanced stage: on this project that started last summer, the foundation is being poured, and the reinforced concrete structure is being put into place The garage providing capacity for nearly 800 cars on three levels will be available for use by visitors to the Liget, and at discounted rates by local residents, by next summer. In order to achieve the goal of a car-free Városliget, additional underground parking is also being constructed in facilities on Állatkerti Boulevard and Hermina Road, with capacity for 700 and 275 cars respectively. The Kós Károly Promenade, for its part, is being set up as a traffic-free walkway, thus ridding the Liget of the 10,000-15,000 cars that pass through every day.

The Városliget Zrt. head feels that the reversal of the decades-long trend of growing paved surfaces eating up its green space is  an important measure in the Városliget's renovation. As a first step in this direction, the unnecessarily wide – at 14 metres across – paved surface of the Olof Palme Promenade is being narrowed to a width of six metres, thus returning nearly 1600 square metres of green space to the park. While the construction is underway, pedestrian and bicycle traffic remains unimpeded on the 6-metre-wide paved surface that will remain.  The renovation of the entire park will entail re-greening several thousand square metres of land, at the expense of its paved surfaces.

"The Liget Budapest Project is the kind of world-class development project that is extremely significant in terms of developing tourism and increasing the city's property values. Investors have already shown interest, and the values of local homes have also increased. Plans for hotels are also emerging. The area around the renewed Városliget will be one the most dynamically developing parts of Budapest," concluded Gyorgyevics.